In the first few months of 2018, I took a course at Western Michigan University on teaching climate change in the English classroom. Bringing climate change into the humanities is a newer approach in education, challenging all teachers – not just those in the STEM fields – to find ways for their students to study, discuss, and try to solve what is going to be the biggest issue facing humankind in the next century.

It’s clear that this new approach is also a timely one. In the first four months of 2018, the Trump administration expanded offshore drilling, cut NASA’s carbon monitoring system, rolled back car emissions standards, and censored government websites on climate change. The list goes on. This, after 2017 ranked in the top three hottest years on record (after 2016 and 2015), and artic ice is melting at an unprecedented rate.

Additionally, on February 14t, 2018, the Marjory Stoneman Douglas tragedy happened in Florida. And what followed was an awe-inspiring example of what young people can do when they become activists behind a cause.

So, it seems, that while some of the adults in our country are taking our environment’s delicate balance for granted, and at the same time students have been capable of affecting real change for worthwhile causes, that it is the perfect time to be teaching our young people a curriculum of climate change.

Having taught in a high school district for ten years, I realize how tricky it can be to change curriculum, so I wanted to create a “model” of what a revised senior writing-intensive English course could look like through the lens of climate change. It would keep all the skills and standards but also include an exploration of climate crisis through critical inquiry. I revised an already-existing curriculum as a starting point to show that these types of changes are both possible and exciting. This post will explore one activity in the curriculum: mini-memoirs about nature. 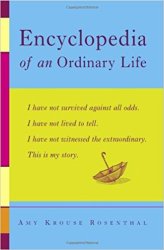 The narrative unit begins with students writing encyclopedia entries examining their relationship with nature. Using Amy Rosenthal’s hilarious and clever book “Encyclopedia of an Ordinary Life” as a model, the goal of this activity is to have students write about, reflect on, and document their personal experiences and connections with nature. In Rosenthal’s text, she lists alphabetically-organized mini-memoirs about herself, from defining moments to deep (and sometimes not-so-deep) thoughts on life. And while the book doesn’t focus solely on Rosenthal’s relationship with nature, there are many examples that address an element from nature and her observations of and interactions with it. Here are two:

If rainbows did not exist and someone said wouldn’t it be cool to paint enormous stripes of color across the sky, you’d say yes, that would be very cool – impossible, but very cool. Children are totally tuned in to the miracle of rainbows – that’s why they are forever drawing them. There’s even something divine about spotting a tiny rainbow in a puddle of water or a splotch of gasoline. Oh, look! A rainbow! It would be nice to have some universal ritual connected with rainbows, along the lines of stray penny equals good luck, and cars with one headlight equals, say, piddiddle/good luck. Maybe: See a rainbow, eat a sugar cube. Or see a rainbow, put a dollar in a jar; then when you leave home at eighteen, your mother sends you off with your rainbow money. A friend once told me a story about how he was going through his five-year-old son’s backpack and he found a picture of a little boy standing under a rainbow crying. His first thought was, Oh God, my son is having some serious problems. When he asked his son about the picture, he told him that he had been playing at school and he saw a rainbow and it was so beautiful that it made him cry (170).

A rainy day comes as a relief. Rain is your pass to stay inside, to retreat. It’s cozy and safe, hanging out on this side of the gray. But then the sun comes out in the afternoon, and there’s disappointment, even fear, because the world will now resume, and it expects your participation. People will get dressed and leave their houses and go places and do things. Stepping out into the big, whirling, jarringly sunny world – a world that just a few minutes ago was so confined and still and soft and understated, and refreshingly gloomy – seems overwhelming (171).

This writing activity can be implemented in a variety of ways. Starting with a close reading of Rosenthal’s text to analyze its structure and word choice to understand what Rosenthal is doing and how she does it, students explore the choices authors make. Each class begins with an entry from her text which students read, annotate, and discuss with each other. Then, students try out some of her writerly moves in a daily journal. Sample prompts include:

As students accumulate a portfolio of entries, they use this material for learning about revision as they return to their writing to tweak and finesse their entries. The final product is their very own “Encyclopedia of an Ordinary Life” and a snapshot of their current thoughts, memories, and interactions with the environment. Students then take one of their encyclopedia entries and expand this piece into a longer narrative in which they have to grapple with what our world might look like in 25, 50 or 100 years. Later on in the year, concepts and ideas that arise from this writing also serve as the basis for their research project.

By helping students reflect on the value of nature in their lives through these short writing activities, it serves as a springboard to get students in the mindset of thinking about the themes that are central to the yearlong study of climate change. It will also help students tap into their experiences with nature and share those experiences with others. By spending time immersed in an attempt to capture specific moments that relate to nature, students begin to reflect on how the environment plays a role in their identities and come to appreciate and be more concerned about its future.